This game was created for a class on game studies/theory. The project was to be based on a prompt written by a student during the course of the class. My game design document is below:

Original pitch: I propose a game in which the version of the game each player receives tells a tiny self-contained portion of a much larger narrative. This way, no one player gets the bigger picture from just playing their version and must consult other players such that analysis must take place outside the context of playing the game. (original pitch by Faye Coltharp)

Statement of purpose: The nature of human communication is often flawed. Distrust and deception cause people to question the messages they receive, especially in the Internet age. Humans are able to connect with others much more easily and can communicate immediately thanks to computers and mobile phones. Because these conversations can happen instantaneously, told only through text without facial expressions and vocal inflection to indicate tone and meaning, miscommunication is rampant. Stories and news are often told second- or third-hand, and personal information is rarely fact-checked. I want to illuminate the phenomenon of miscommunication. Relationships between people become more and more dependent on virtual communication, allowing for more frequent interactions with the potential for greater misunderstandings. Through the narrative of two young people entering a romantic relationship told from the perspective of the two people and their respective best friends, I intend to examine how second-hand stories and misinformation influence humans’ perspectives of others.

Overview: Voice Unheard is a text-based narrative game told from four distinct perspectives. The story is told exclusively though smart phone apps, notably text messages and Fyr, a dating app similar to real-world Tinder. The story will require four players to play concurrently through four separate but connected Twine files. Each player will experience the story from one of four perspectives, and the conversation choices made by each person will affect the other players in real time. Choices in a text conversation are made by selecting one of two options with the mouse. Once a selection is made, the conversation will continue until another choice is presented to the player.

After each player plays through the narrative once, the group comes together to try to work out what really happened in the story. No one will have the full story or the full truth, so each will be representing a perspective that will at times be at odds with another player’s. Following prompts given by a mediator or read off a card, the group will discuss how their perspectives on the story influenced their perceptions and will be asked to examine whether “truth” is a tangible goal or a subjective experience.

Story: Leah is a recent college graduate who just moved to the city to start a job as a receptionist at a large bank. James is a barista and aspiring film director, trying to make ends meet while filming his passion project. They meet each other on a dating app called Fyr. They instantly hit it off and begin seeing each other. Catherine, Leah’s best friend, is struggling through mortuary school and multiple girlfriends while trying to be supportive of Leah’s new relationship. Tracey, James’ roommate, is building his resume as an actor and increasingly spends time in walk-on parts for various shows and movies.

Leah and James’ relationship at first seems to be destined for success and based on mutual interests and desires. However, it begins fracturing when they don’t see eye-to-eye and fail to work out their disagreements. With Catherine convincing Leah to ditch James and Tracey advising James to work it out, the relationship grows more and more stressed until it ends, to the dissatisfaction of both. The primary issues in the relationship stem from Leah’s difficulty separating herself from romantic relationships, James’ unwillingness to move on from his previous relationship, and their inability to communicate their true feelings.

Meanwhile, Catherine is working her way through mortuary school while trying to appease her mother so she will continue to pay for her apartment. Doing so means lying about her sexuality, an issue she continually chafes against, and when she ultimately decides to come out to her mom, her mom denies it and continues to support Catherine while maintaining ignorance of who Catherine is. Catherine finishes mortuary school and gets an apprenticeship at a local funeral home, earning enough money to cut herself off from her mother (at least financially).

Tracey is working hard to get enough regular acting gigs to quit his part-time job teaching acting classes to under-privileged teenagers. While he considers this job a positive thing, the stress of coming face-to-face with the issues in his students’ lives coupled with the constant auditions and 12-hour shooting days forces him to come to terms with the fact that he can’t do everything.  His big break comes when he gets a tertiary role in a TV series filming in New York, where he decides to move to.

Leah, 23 – An excited and optimistic recent college graduate who moved from her small college town to the big city to have better job opportunities. After a few temporary positions, Leah is hired as a full-time receptionist at a large bank, a job with a decent salary and great benefits. She spends her free time sitting at the conservatory reading and researching MLIS programs. She has a cat named Sandwich (Sammy).

Catherine, 23 – A sarcastic but kind-hearted mortuary science student who grew up with Leah but moved to the city when her mother got divorced. She loves all things witchy and of the occult, and she spends her time watching old horror movies and hanging out with her collection of reptiles and amphibians.

James, 25 – An aspiring film director who moved to big city from small rural area after college to try to make it big. He works at a barista for a local coffee chain, and spends his free time working on screenplays, watching movies, and playing video games. His family is supportive of him but not wealthy enough to fund any of his projects. He is trying to film a feature-length production his passion project, but it has stalled out due to lack of funds, equipment, and time.

Tracey, 26 – An actor who works part-time as an acting teacher for a program that promotes the arts in under-privileged schools and full-time as an actor on various TV shows and films. He met James in college and has acted in many of his film projects. Tracey builds up his resume with bit parts until his agent books him a tertiary role on a popular national TV show filming in New York.

UI/Interface: The game will start on a screen with four links that link to the four separate stories. The mediator will set up four computers, each one open to one of the four stories. Each story path has the same aesthetics – the screen will be white and the text will appear in various colors depending on whose text messages it is. The messages will reveal over time down the screen, and when there is a choice to be made on one person’s story that affects another person’s, the text messages will wait until that choice has been made to reveal the next message. The two points at which a player is asks to click on something and move to the next screen are when they are presented a dialogue choice to make and when they switch to texting another character. 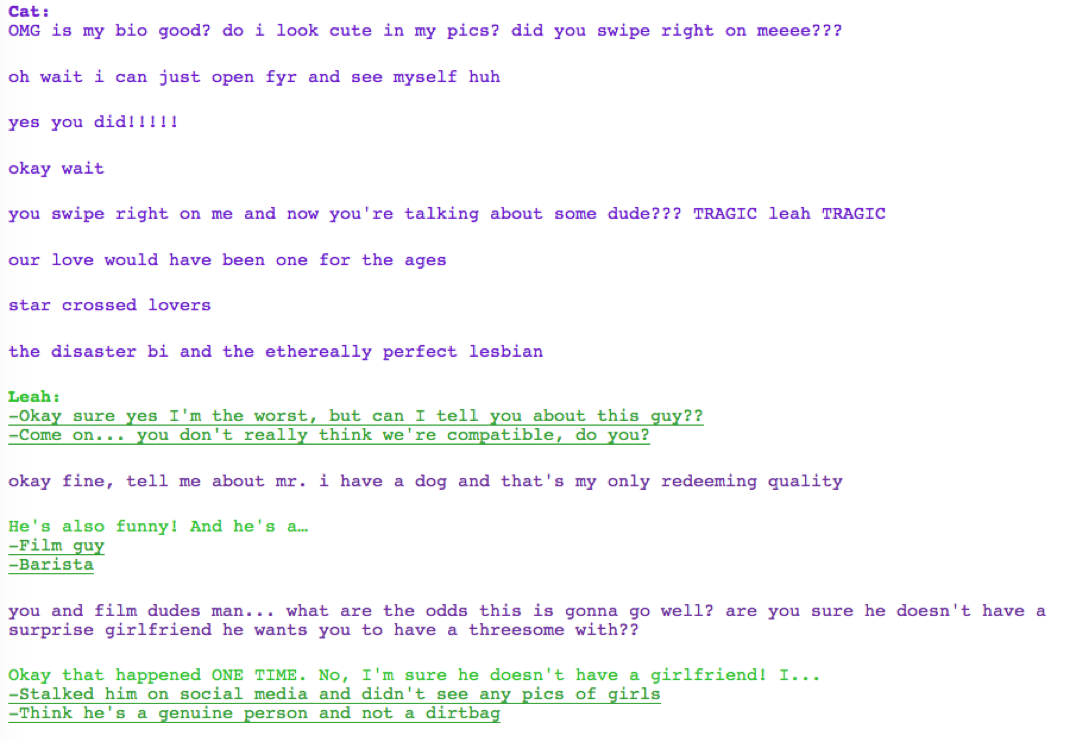 1. Taking turns, explain what happened in your own words.

2. Why do you think this happened?

4. What would you have done if you were living this character’s life?

5. (ask each person) What is your primary emotion towards each character?

6. Do you feel as if your story resolved? Are there still unanswered questions?

Twine game exploring the way we communicate in relationships